I've been picking up on a trend I've been seeing more and more. It is not necessarily a current runway trend or a high fashion trend... but a past trend that I see on it's way back in! It's starting on the streets...a street trend I've been seeing. Which I've noticed (in a lot of cases), is the bases, the beginning, the birth of new trends that are eventually adopted by the designers, then it's all over the runway, then the fashion magazines get a hold of it and run with it! After that happens... BOOM it explodes! It's at Nordstrom, Forever 21 has it's version, and then eventually *don don don, it's at JCPenny, Sears, and even Walmart. Oh but then the next big thing has already hit!

That my friend is the beautiful, continuous, cycle of fashion... and boy am I hooked!

Anyways, as I was saying... That oh so classic and chic 'Red Lip'. It's going ORANGE. As I predict ;) I'm loving it and so should you! 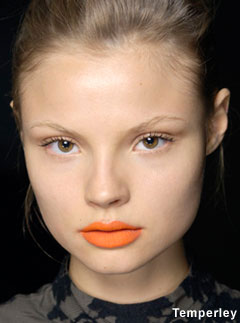 Thanks for checking out my Blog and leaving a comment :) Love to hear what you think!